Buddha statues inshrined in a wall in Ava, Burma

Buddha is the supreme human being honored as a deity by all the people around the globe. Lord Gautama Buddha is regarded as the leader of Buddhism because he had achieved enlightenment through his own personal efforts, dedication, sacrifice and meditation. After attaining Nirvana, he came to know about the facts of life’s misery all the pain and sufferings of mankind. Gautama then conveyed his wisdom to others to lighten them up with truths about life. Buddha first expounded his first sermon in 528 B.C. in Deer Park Sarnath near Varanasi and kept alive in the Buddhist world ever since. The Dhammacakkappavattana Sutta, the Buddha’s teachings on Four Noble Truths is main reference which Buddhists have been following for years. In the beginning after his enlightenment, Buddha thought that; he had learned the lessons which cannot be explained to general people. “This is such a subtle teaching that he wouldn’t be able to convey lessons precisely in words what he had discovered, so he decided to sat under a tree for life time”. Meanwhile when Buddha was having this tempting thought, suddenly the creator deity of Hinduism Brahma Sahampati appears and convinced Buddha to reach out to peoples and share his knowledge. Buddha couldn’t deny the request of Brahma so he started with an aim of clearing a little dust that people had in their eyes. After then he started his journey from Bodhi Gaya to Varanasi where he meets different ascetic people’s who were really impressed by his radiant appearance and his principles. Similarly like Buddha, the Buddhist monks in different countries are teaching disciples the four noble truths. The superlative attainments or the Four Noble truths are as:

Each of these truths has three aspects altogether 12 insights which will replenish the Four Noble Truths in your life. In Buddhism, Arahant is the perfected one who has learned all four noble truths. 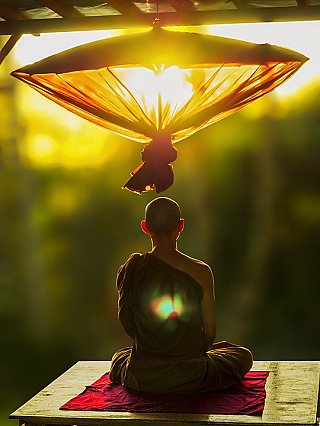 The basic truths are difficult to understand by the common where they misinterpret the first truth “There is suffering” into like I am suffering and I want to end it. Who ignorant people are found to be practicing meditation in order to retreats from suffering. The actual meaning is There is Suffering . You cannot run away, it directly inherits after your birth. We should acknowledge that Dukkha exists. We shall take it alike as physical pain or mental anguish in a habitual way rather than seeing it as a Dukkha personal misery. Buddha teach us that embrace your problems, pains, understand them and find a reason why there is trouble. Because second Truths tell us that there is a cause or origin of every pain. Everything happens in our life for a reason. The cause of suffering might be due to our expectation, desires, illness, betray or some detachments. It is our responsibility to analyze the reason of sufferings. The ignorance about reality of life, attachment to pleasurable experiences and aversion are the main reasons. We constantly have a fear of getting which we don’t desire or not getting which we desire.

The Third truth states that when we detach ourselves from ignorance and crave then we can eradicate the sufferings from our life. And the last Fourth Noble Truths says that there are interconnected aspects when developed together will lead us towards the path of ending Dukkha i.e. is Dhyana . The path term is usually described to take us to the Noble Eightfold Path which are as: Right View, Right Intention, Right Speech, Right Action, Right Livelihood, Right Effort, Right Mindfulness and Right Concentration. Buddha says that when we have learned these Four Noble Truths with open mind then we will be able to handle all the suffering with an ease. Eventually it will bring a smile in our face like that in Laughing Buddha statues.